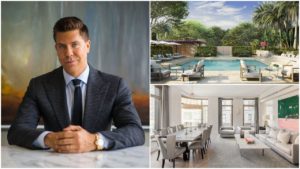 The Sweden-born Mr. Eklund said the building has a level of luxury that’s typically been reserved for mansion in the hills. Apartments—and several townhouses—will have floor-to-ceiling glass windows that slide horizontally and disappear into walls, and the building will have private glass showrooms for luxury cars.

While Mr. Eklund, 42, still travels back and forth to New York and Miami— where he also has an office and a team of brokers—for now, L.A. is his home base. “It’s fun to get the best of three worlds,” he said.

We caught up with Mr. Eklund to discuss vertical living in a land known for mansions, his dream of living near the beach, and more.

Fredrik Eklund: If you look at my personal real estate. It’s like a staircase going up to heaven. I had a small apartment in Stockholm and then before we left, we had a penthouse in New York. But now, for me, a dream home would be smack on the beach. When I was a kid, I had posters of beaches around the world on my walls. To walk on the beach with my kids would be dreamy. We’re about 25 minutes from the beach now, in Beverly Hills.

Even though I faced the water in New York, a beach property is so different.

MG: Do you have a real estate property that got away?

FE: I had a listing that I never sold. I was obsessed with it and would have wanted to buy it if I could afford it. It’s the Marble House at 60 Collister Street in Tribeca. It’s an entire mansion with 17 different kinds of marble. I sold out the whole building, but not that one. It had a 40-foot lap pool, a sauna and a private garage.

MG: What does luxury mean to you?

FE: For me, luxury is convenience. And being a father of young children, it’s about services. Having amenities—in the building, in the apartment and in the immediate environment of the home.

In L.A., it’s an exciting time. It’s known for luxury, large houses, but what’s happening now is luxury condos with incredible conveniences are coming. Even in Beverly Hills, they’re getting them. Vertical living didn’t used to be something people understood there. The whole idea of making a decision before a building was done, and having sales galleries before the home could be seen, that’s new.

MG: What area do you think is the next hub for luxury properties?

FE: You want to buy luxury in a neighborhood where there won’t be more luxury condos being built. In New York and even in L.A., if there are a lot of big towers around you, and it’s not the best place to buy. 8899 is a great example of a good investment, because it was grandfathered in, but something like this won’t ever be built again.

In New York, the West Village and NoHo are the only neighborhoods that are not seeing too much inventory. Prices have consistently gone up there. That’s because there are height restrictions and landmark buildings.

FE: Homes in the low-$3 millions are flying off the shelf. And in L.A., you also have $70 million, $80 million, $100 million homes that are selling. But the more difficult market—not that it’s bad, just tricker—is the $6 million to -$15 million market. Those take longer to sell; that’s a bit of a surprise.

MG: Where are the best luxury homes in the world and why?

New York will always have incredible real estate, and penthouses, with millionaires and billionaires buying them, but when it comes to mega-luxury homes, I have to say L.A.

MG: What’s your favorite part of your home?

FE: The swimming pool, which is an infinity pool. Since we’re far up above the city, the view is incredible. Being in the pool looking at that view is just amazing. The kids love it, too. Having lived in New York for 16 years, we so appreciate it.

MG: What best describes the theme to your home and why?

FE: It was built in 1970, and it’s very ’70s, it’s like a glam ’70s, Tom Ford-style house. It’s nothing like I’ve ever seen before. It feels very sexy. My apartments felt homey, but this is more glamorous. It’s not necessarily so great for kids. There’s lots of stone, wood, glass and mirrors. It’s an amazing house to throw a Grammy party in.

MG: What’s the most valuable thing in your home?

FE: The kitchen, because I’ve really made an effort to eat with the kids—no phones, nothing. I cook every night. For me, cooking is an act of love.

MG: What’s the most valuable amenity to have in a home right now?

FE: There are a couple. In a new building, for the kind of buyer who would buy at 8899, it’s the auto stable, designed for people who collect cars. It has beautiful herringbone-brick flooring. We had a buyer with a $3 million car, and he wanted the garage to be as beautiful as the rest of the apartments.

At 40 Bleecker in NoHo in New York, you can get IV drips and a cryotherapy session in the building. Wellness is the other extreme. In general, you’re seeing things that used to only be in a large house being available to apartment owners.

FE: To really give it some time. When you’re buying or selling, it can be very impulsive. It’s like when you walk by a retail shop, and you see a watch or an amazing dress, and you think, “I gotta get it,” and you get distracted and forget about it, and then two weeks later when you walk by again, you think, “why did I like that so much?” Brokers, myself included, can be pushy, but you need to take time.

We’re in a market where you have time to come back a few times and look at a place in different lights and at different times.

MG: What’s going on in the news that will have the biggest impact on the luxury real estate market?

FE: Interest rates are important. There’s been a lot of chatter about them going lower, though they’re at historic lows. If they keep going lower, it gives the real estate industry a major boon. Prices will go up, because money becomes so cheap.

MG: What is the best area now for investing in luxury properties?

FE: In super prime neighborhoods—in Beverly Hills, West Hollywood, Trousdale, Holmby Hills. You also can’t go wrong in places like the West Village and NoHo in New York. Those are strong even in a down market.

MG: If you had a choice of living in a new development or a prime resale property, which would you choose and why?

FE: Not all new developments are created equal, so there’s no easy answer. It’s always nicer to have everything new, new, but it’s not always better. If you’re buying super, super luxury new-new is better. But a resale can be better with middle-of-the-road luxury.

MG: What area currently has the best resale value?

FE: Those places we talked about that hold their value. In Miami, beachfront is most valuable. There’s not much that can be converted and there’s no land left.